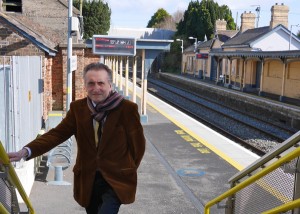 The recent announcement of the proposed Rapid Bus Service to Swords is welcomed. However, like others, my hope is that it will not act as a poor substitute for the promised Metro Service.

There are existing proposals to improve the northern rail line which we must not be lost sight of. Extending the DART service to Balbriggan by 2014 was central to improving the commuter service for the North County and under pinned much of the zoning of Development Lands. Sadly, this proposal appears to now be gathering dust.

The North County, in line with other areas, has seen the real effect of the employment downturn, with its consequential reduction in the demand for commuter places on public transport and on road space.
North Dublin’s population is of a size to warrant upgrading all aspects of public transport services. When the economic uplift occurs and employment increases, the demand will far exceed the present capacity. Without capacity upgrade on the northern line, there will be an unacceptable impact on the quality of life for all commuters. It will also have knock-on effects on our communities and the time and energy which people will have to invest in local organisations.
That is why the Local Authority must use its position to spearhead the campaign for Public Service upgrade and delivery of the promised new services.